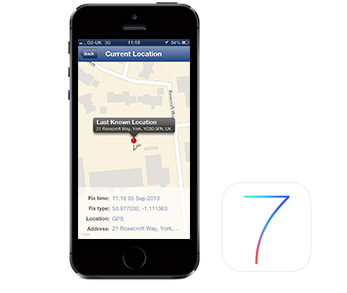 The latest version of Apple’s latest iPhone operating system is now fully supported by Vismo offering a comprehensive  tracking solution for the world’s leading smartphone. The new launch coincides with the 59th Annual ASIS Exhibition in Chicago from the 24th to the 27th of September.

iOS 7 is the seventh version of Apple’s iOS mobile operating system announced at the company’s Apple Worldwide Developers Conference (WWDC) on June 10th 2013, and was released on September 18. The new version of the operating system includes a redesigned user interface and a number of improvements to functionality.

Vismo remains the most up to date tracking app available on iOS 7 providing unparalleled compatibility with Apple’s smartphone and continues to be the most robustly tested tracking solution available for iPhone.  iOS 7 has allowed Vismo to develop some significant upgrades including a separate panic button on the iPhone App which enables you to panic from the home screen using one keystroke.  We also added the capability to request the “current location” of a user’s iPhone in between fixes directly from the Vismo Secure Website using Push Notifications. This also allows the Crisis Centre verify if a member of staff is in mobile coverage, and if they have their mobile switched on.

If you are attending the 59th Annual ASIS International Exhibition in Chicago Sept 24-27th please visit us at Booth #3313 for a demonstration.

Vismo has taken another leap forward with the release of Vismo Global Tracking for the BlackBerry 10 range of devices.

Using the latest location technology from Blackberry, Vismo is now able to utilise Wi-Fi positioning which takes advantage of the rapid growth of wireless access points in urban areas. This means it is possible to get location fixes where you may ordinarily get no GPS signal i.e. Shopping Malls and Airports. This offers greatly increased accuracy when trying to pinpoint a member of staff, especially if GPS coverage remains an issue for an extended duration.

If you’ve moved to BlackBerry 10 and you’d like to see Vismo deployed on the new platform, don’t hesitate to contact us.

If you are attending the ASIS International 59th Annual Seminar and Exhibits in Chicago Sept 24-27th please visit us at Booth #3313 for a demonstration.