Each year 8 million tonnes of plastic enters the world’s oceans, harming the environment, the wildlife and the planet. Making up 50% of this number is single-use plastics, such as water bottles, shopping bags and plastic straws.

The use of single-use plastic is increasingly becoming a global concern due to its inability to be properly recycled. Most often, the material cannot biodegrade in nature, and instead takes hundreds of years to break up and turns into a toxic microplastic. Microplastics leave behind chemicals and toxic particles that are harmful to the environment, oceans and wildlife.

As concern over single-use plastic, and its impact grows, many are trying to reduce their plastic use and look for alternative materials that are easier to recycle and have less harm on the environment. To help increase awareness of single-use plastic, British adventurer and Women’s World Record holder for fastest women’s’ solo row across the Atlantic, Kiko Matthews, set up the ‘Kik-Plastic’ project to encourage communities to join in to make a positive change when using and disposing of plastics.

Setting a goal to clean 79 of the beaches around the coast of the United Kingdom, Kiko set off on a twelve-week long tour cycling around the coasts, beginning in the south of England. Creating Facebook events for each beach clean, Kiko encouraged volunteers from local communities, businesses and schools into the Kik-Plastic project and has collectively cleared 3. 45 tonnes of waste from UK beaches.

The Kik-Plastic project kicked off on the 5th May 2019 at Margate beach in Kent, England, and over the past three months, Kiko cycled over 6,800km around the UK coastline working with local volunteers to clean beaches. From Kent, Kiko cycled around the south coast of England to Lands’ End cleaning Sennen beach. 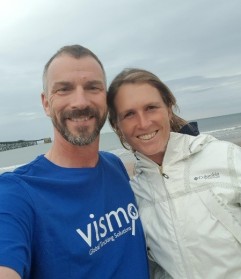 She then continued all the way up the west coast through Wales, Northern Ireland and Scotland before reaching John O’Groats and heading back down the east coast.

On the 17th July, Kiko was joined by Colin Dale, VP of Business Development at Vismo, at Headland Beach in Hartlepool, where he participated in the beach clean and supported Kiko in raising awareness of single-use plastics. After working around the clock with over 1900 volunteers, Kiko went on to complete her tour of the UK at the London beach clean on the 28th July.

“Combining my love for challenges with my love for the environment, I wanted to help raise awareness across the UK by cycling and completing local beach cleans with local communities.” Says Kiko Matthews.

“I wanted this challenge to include everyone and anyone, whether a cyclist, a local business or school or just a beach lover. My focus for this project was not to be the fastest, but to raise awareness of the problem of single-use plastic and engage communities to help tackle it and hopefully go home to change their lifestyle and reduce their single-use plastic use.”

Many of the items that were collected, included plastic bottles and lids, abandoned fishing ropes, plastic straws, plastic cotton buds and crisp packets. Most worryingly, most of these items were unchanged from when they were thrown away, further demonstrating the years it take to decompose and leave harmful toxins on the planet for years to come.

Kiko’s journey around the UK has been tracked by Vismo. Using the smartphone application; location fixes of Kiko’s journey were automatically sent to the secure Vismo Portal allowing for real-time tracking of her journey. Working with ZeroSixZero, Kiko’s history trail has been mapped, while including the locations of each beach clean ensuring everyone can interact and get involved with her journey. 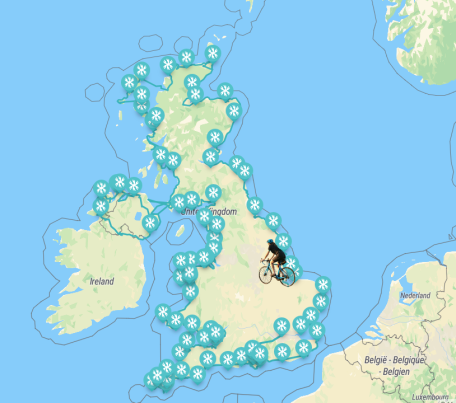