Aware she would be out of her usual terrestrial network coverage for over a month, Kate took the Iridium Extreme Satellite Tracker from Vismo. Taking full advantage of the Vismo solution, Kate was tracked and monitored for her entire trip and communicated with UCL mainly via text message upon the satellite device. As the only satellite network with 100% global coverage, the Iridium Extreme Satellite Tracker ensured Kate would stay connected and relay any important information to the team at UCL in London.

The Iridium Extreme Satellite Tracker is fully integrated into the Vismo platform allowing users to benefit from the range of features within Vismo including panic alerts and geo-fencing. 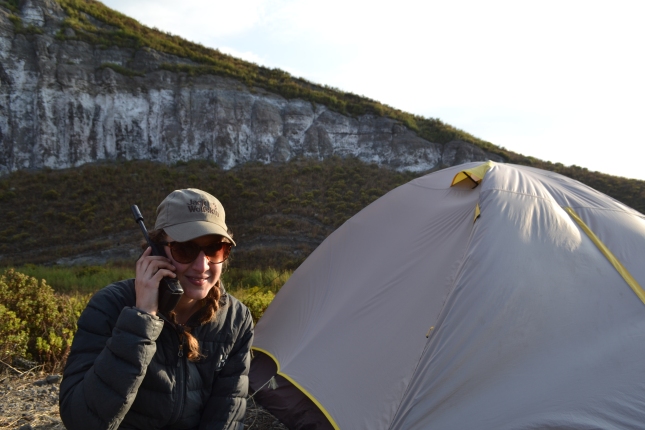 Ol Doinyo Lengai is the world’s only remaining active carbonatite volcano, and Kate’s expedition was to research and understand how it formed, why it is still active and what caused it’s magma to be so unique as the coldest lavas on earth at less than 600 degrees C. Twelve years had passed since the last sample was collected and only 2 weeks after the sample was taken, the volcano unexpectedly exploded. Taking precautionary measures, and not wanting to get caught up in any physical danger unable to communicate with anyone was the reason Kate knew she needed a satellite device upon the trip.

Whilst there, Kate was supported by Dr. Emma Liu (UCL), Mr. Arno Van Zyl (Vertica Ltd) and local guides, as well as the Geological Survey of Tanzania (GST) and the University of Dar Es Salaam, to take much needed samples of the rare natrocarbonatite lava from the Ol Doinyo Lengai Volcano.

After Kate become concerningly ill during the first ascent of the Ol Doinyo Lengai, the Iridium Extreme Satellite Tracker really came into its own. It was the critical tool which allowed her and the team to connect with emergency medical services in the UK, saving the need for a medical evacuation.

Kate said about her trip:

“We selected Vismo because of its track record over many years in providing mobile comms for individuals and organisations around the world, some of them in the most demanding situations, from mountains in the Himalayas to remote rivers in South America. Those comms include Vismo’s technical expertise and server hardware, which together enabled the precise tracking of our location for use by our security team, and two-way communication with UCL.

“For the most part, we ended up using the satellite phone to update UCL via text message and perhaps more importantly for morale, occasionally snatching a moment to call home. Although, after becoming concerningly ill and deteriorating rapidly during the first ascent of Ol Doinyo Lengai, I was truly grateful to have a phone powerful enough to connect me through to emergency medical services in the UK, which saved me opting for a medical evacuation as my last resort.

“When we arrived at the summit, we were fortunate to find that the activity on the crater floor consisted of lava flows, an open lava pool and one spatter cone, giving us ample opportunity to proceed with our sampling strategy.

“By the end, we had spent eight days and nine nights at the summit, giving us enough time to collect six freshly erupted natrocarbonatite samples, six MultiGAS traverses, two MultiGAS dips, three nights of thermal imaging, three drone-based DEMs [digital elevation models] and eight tephra samples, all the while smashing our targets with a whole load of brilliant teamwork.”